Blowing on the fire: An analysis of low quality and hyper partisan news sources circulated by coordinated link sharing networks in Nigeria 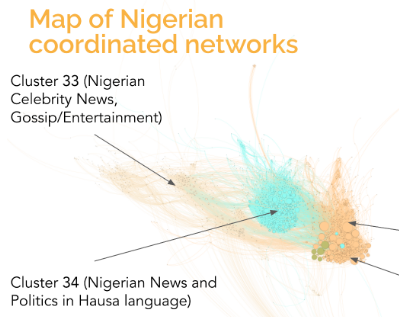 With its complex geographical, political and ethnic characteristics, Nigeria has been identified as an understudied and thus ideal case study to validate a content-agnostic approach such as Coordinated Link Sharing Behavior” (CLSB) with A-B-C cycle. The impact of social media on democracy was recently at the center of the public debate in the country following the government ban of Twitter (Teniola, 2021). Furthermore, Nigeria is experiencing a resurgence of the ethnic and religious divisions that caused conflicts, violence and victims during the last decades. Media organizations have not been left out and are alarmed by the heightened insecurity in the country that has now resulted in journalists being attacked and arrested. Despite Reporters without Borders’ 2021 World Press Freedom Index (which saw Nigeria drop five places to 120) that described the country as “one of West Africa’s most dangerous and difficult countries for journalists”, the government has turned deaf ears to calls by the International Press Centre (IPC) and local media organizations to investigate the attacks and prosecute perpetrators, the government is yet to make policy statements or even take action.

In this report, we bring the CLSB approach a step forward in the direction of what we call the A-B-C cycle. A cycle begins with harmful content and proceeds by detecting deceptive behavior to identify manipulative actors. Once a list of such actors has been identified, the next cycle uses the content produced by these actors to initiate a new iteration of deceptive behavior detection that, in turn, leads to identifying an updated set of manipulative actors. The A-B-C cycle is useful to keep a list of coordinated accounts updated over time (Giglietto et al., 2022).

Would you like to work with us?
Let’s get started.