How the “Migrants in the Struggle” caravan was positioned as a threat: Tracking story origin and framing 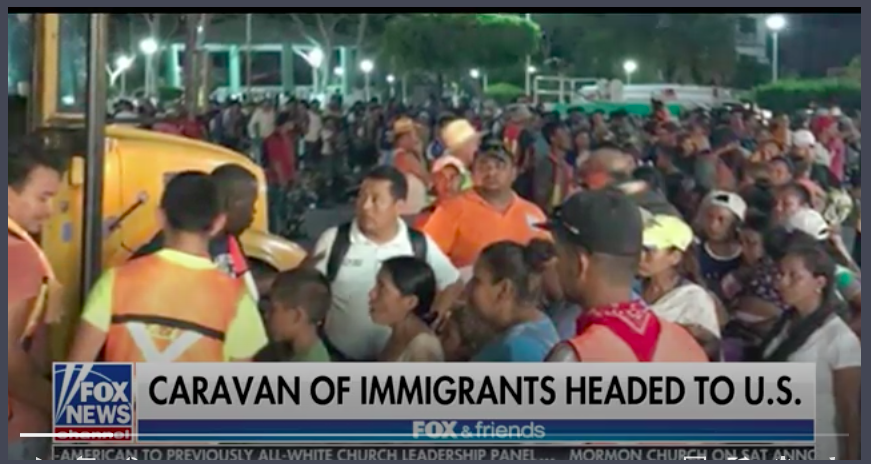 The story of the “migrant caravan” in the US media is a cautionary tale of agenda setting and framing. The story began on March 25, 2018, when San Francisco-area independent media company indybay.org published an article promoting a local event, “Pueblo Sin Fronteras & the Latin American Refugee Movement.” The event, organized by Pueblo Sin Fronteras, was described as, “Bay Area wrestlers for immigration justice are gathering in solidarity with migrants currently forming a 1,000+ person caravan from Central America through Mexico - the ‘Migrants in the Struggle’ 2018 Refugee Caravan.” Interestingly, this framing of the procession as a “refugee caravan” was not picked up in subsequent reporting. While the categorization of it as a “caravan” was consistently used, the word “refugee” was almost completely dropped from the discourse, replaced instead with simply “migrant.”

Within a week, on March 30th, Buzzfeed News published original reporting from Adolfo Flores, their national security correspondent focused on immigration. Flores traveled to San Pedro Tapanatepec, Mexico, and interviewed members of the caravan and organizers from Pueblo Sin Fronteras for the story, “A Huge Caravan Of Central Americans Is Headed For The US, And No One In Mexico Dares To Stop Them.” The article described the individuals as “migrants” seeking asylum.

The same day, Breitbart reported on the caravan as well in the article, “Caravan of 1,500 Central American Migrant Families Crossing Mexico to Reach U.S. Border.” The Breitbart article referred to the procession as “known as the Viacrucis Migrante 2018,” borrowing the term from the Pueblo Sin Fronteras Facebook page, from which they also sourced much of their information and images . Breitbart’s reporting also cited an article published on March 26 in the Mexican publication El Universal. This first Breitbart story used the term “families” in the headline, and described the group as “reportedly made up of familes from Guatemala, El Salvador, and Honduras who are fleeing extreme poverty and gang violence,“ and “requesting refugee status,” indicating it had not yet fully embraced the migrant threat frame in this story.

The next day, April 1, Fox and Friends aired a segment at 6:10 am, “Border Patrol reaction to caravan of immigrants headed to US,” in which they interviewed border patrol union leader Brandon Judd about the caravan, who used the interview to voice opposition to the “catch and release” policy that would allow these individuals to enter the country and “disappear.” The story cited Buzzfeed’s Adolfo Flores’ reporting and showed images from his social media feeds. In the segment, the host referred to the procession as a “march,” and the headline and story referred to the individuals not as “migrants” but initially as “immigrants.”

Shortly after this segment aired, at 8:56 am, President Trump tweeted the following:

After the Fox and Friends story, there were 172 stories published in US media sources that day reporting on the caravan in the context of President Trump’s tweets, reaction, and policy threats to DACA and NAFTA. All of these other stories focused on or referenced Trump’s reaction, with his name in all but three of the headlines. A large portion these initial stories used the word “immigrants” to describe the individuals. Despite Trump not actually using the phrase “migrant caravan,” 15 (8.7%) of these stories included the phrase. ABC 7 out of Los Angeles (“Trump warns of migrant caravans, but organizers say reality far from his portrayal”) and Daily Mail (“Trump warns of migrant caravans coming to the US”) used “migrant caravan” in their headlines -- and attributed it to Trump -- while 13 other articles used the phrase in their story text.

By April 2, there were 1,069 stories matching the query [(migrant* OR immigrant* OR refugee*) AND (Mexico OR Honduras) AND (caravan OR procession OR march)], of which 12.6% contained the phrase “migrant caravan.” That proportion grew to 29% of the 1,728 matching stories published on April 3. The story started to die down by April 4.

The story picked up again in mid-October, when news of a new caravan of Hondurans broke and Trump threatened to withhold aid from Honduras, Guatemala, and El Salvador. This time, from October 1 to December 12, 64.6% of the stories matching the query [(migrant* OR immigrant* OR refugee*) AND (Mexico OR Honduras) AND (caravan OR procession OR march)] contained the phrase “migrant caravan.” This language had solidly taken hold as an anchor term for the story.

Interestingly, even though early stories of the caravans referred to the individuals as refugees, immigrants, and migrants, by the October resurgence of the story the language was solidly identifying these individuals as “migrants” only; only 4.2% of stories that contained (Mexico OR Honduras) AND (caravan OR procession OR march) referred to the individuals as immigrants or refugees and not migrants. While the word “migrants” used to primarily show up in US media in stories about foreign countries, such as Syria and various European nations, word space calculations showing keywords in the context of other words that they most frequently appear with show that “migrants” started showing up with “Mexico” in US media as early as July 2016, at the height of the Trump campaign anti-immigrant messaging. Trump himself shows up with the word “migrants” in January 2017, the month he took office.

“Migrants” convey individuals who are by nature itinerant, while “refugees” imply those affected by situationally-forced migration, and “immigrants” imply that the individuals will be entering and settling in the US. The media’s adoption of the phrase “migrant caravan” and “migrants” is further evidence of the adoption of Trump’s anti-immigrant framing and rhetoric.

This framing can clearly be seen through an examination of the top words used in coverage of the story. The most frequently used words in stories containing “migrant” with “Honduras” or “Mexico” included illegal, violence, criminals, threats, gangs, crime, alien, and onslaught.

There is quite a contrast in the reporting and framing of this story when it was developing (and Trump had yet to weigh in) -- when even right-wing source Breitbart described the event with some measured humanization as a “caravan of migrant families,” -- to months later when the mainstream media has largely adopted Trump’s frame of the caravan and the individuals in it as a threat. This is clear from yesterday’s headline in generally left-leaning source Newsweek:

Looking at the story of the migrant caravan as a case study illuminates concerns of agenda setting, framing, and groupthink conventions in reporting. (It may also be an example of the negative effects of the dominance of SEO in digital publishing; when one phrase catches on in a story all publishers may be pressured to start including it.) We at Media Cloud will continue to monitor and report on how this story is covered and framed; words matter, and the ways we choose to classify and describe other humans matters most of all.

An exploration of the prevalence of denigrating terms in immigration coverage of mainstream US media.